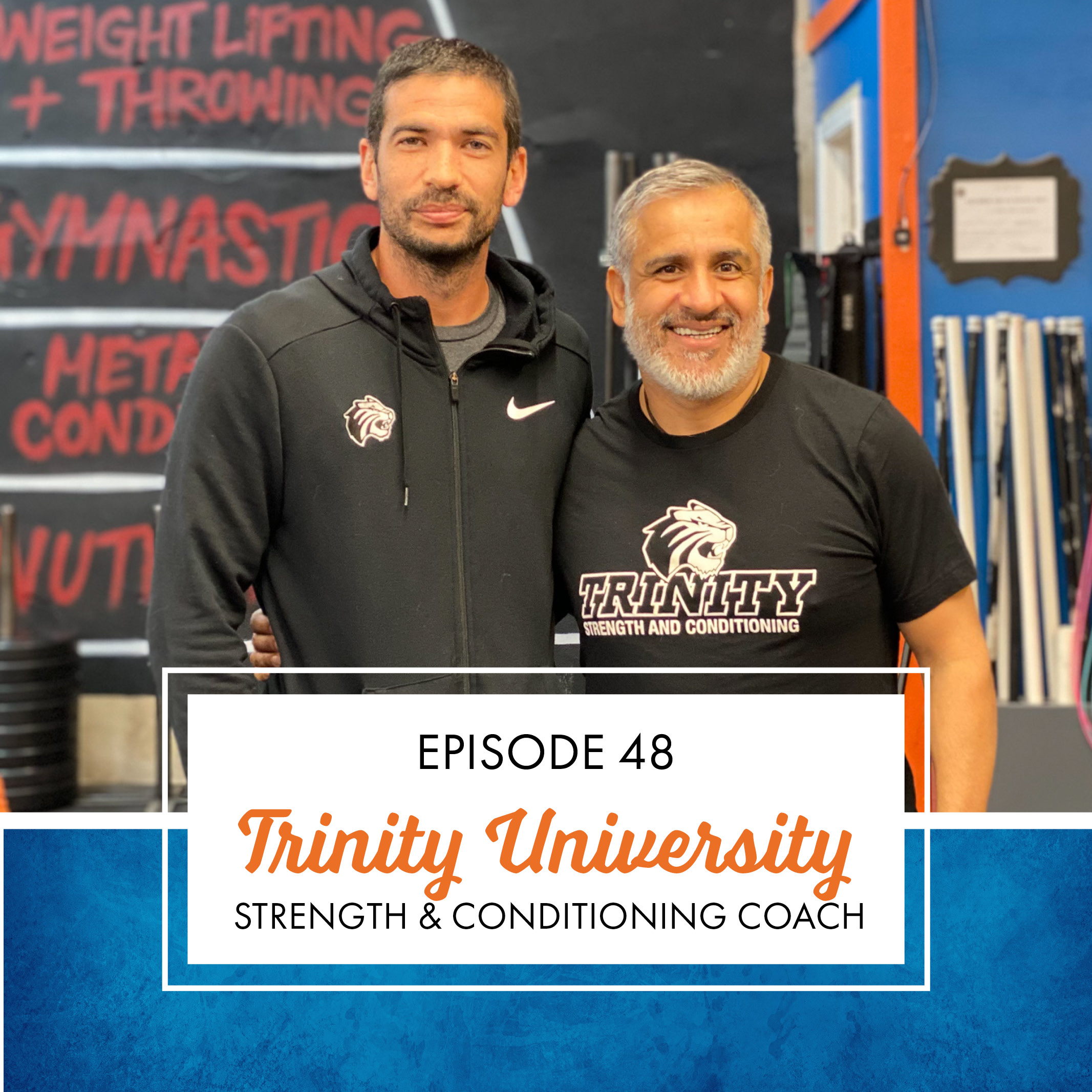 Getting his master’s degree in Strength and Conditioning, Daniel Martinez has published multiple academic papers and has worked directly with Penn State University, the University of Texas, USA Beach Volleyball, the Houston Rockets, and the Philadelphia Eagles, to name a few.

He now calls Trinity University home as the Head Strength and Conditioning Coach overseeing the training plans and schedules for 17 varsity sports. Daniel Martinez is on the podcast talking about his athletic background of track & field and Olympic weightlifting, coaching and mentoring student athletes, and keeping his family at the forefront of his life.

Coach Mike met Coach Daniel through a mutual friend, Optimist Wes Kimball. Back in the day Wes and Daniel competed together as Olympic weightlifters. When Daniel needed a space to train his volleyball athletes, Wes recommended CrossFit Optimistic.

Influenced by his own experience as a student athlete, Coach Daniel gets to know his athletes on a personal level. After spending a year at UTSA running track, he ended up leaving. “I was not mature enough as a student to be a successful student athlete.” During his time at UTSA his high school coach and mentor, Gary Green, would check up on him.

“Every time I would talk to Coach Green, which was every couple of weeks, he would see how I’m doing. I would tell him everything’s great, while at the time I was really struggling with school. But because I was so concerned with the perception of ‘hey I am supposed to be successful and I’m not supposed to be struggling.’ I felt like I had to deal with that alone.” -Daniel Martinez

Now in his role as not only a coach but as a mentor, he tells his student athletes “when people care about you, you have to let them care about you.”

Working with student athletes, Daniel wants his athletes to succeed in their sport, but also take away lessons they can apply to their training later in life.

“When we send kids home like right now with their winter training, is I always tell them if you show up and you’ve jumped so much that you’re jumping higher but your knees hurt all the time, that’s not how we do it. So it’s like certain people sell out for something, like maybe it’s a snatch 1RM or a vertical jump but they kill their body doing it. That’s not a formula for long term success. You’re trying to teach them how to not only be successful for our athletes for the college competition environment but I honestly want them to be able to train healthily and effectively until they’re 50, 60, 70 years old. You know you want them to be skills they’ve learned for a lifetime.”

The Future for Daniel Martinez

Professionally, Coach Daniel wants to get his PhD in New Zealand, continue to push himself in his personal fitness endeavors, and continue to spend time with his family. To hear the full story, you can listen to the podcast using the links at the top. After you listen please leave us a written review and five star rating!